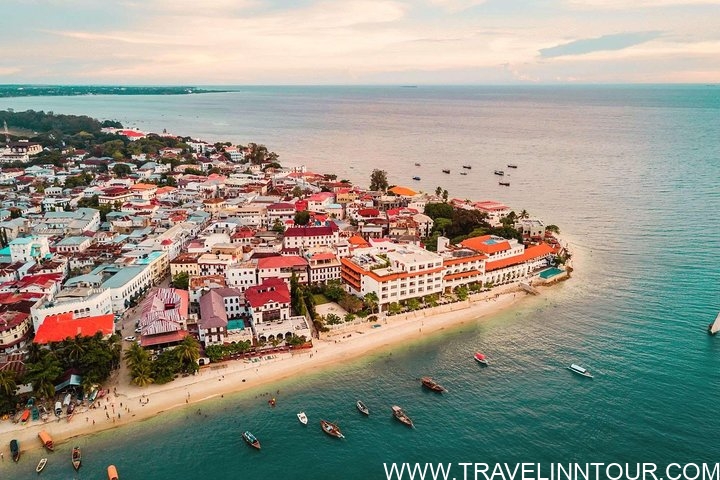 Mji Mkongwe (in Swahili) or Stone Town is the old part of Zanzibar City, the capital of the island of Zanzibar, a part of the East African state of Tanzania. Stone Town is a satisfying location to roam around aimlessly and experience living history.

The stone town is built on the western shore of the island. It includes narrow alleys, stores, homes, mosques, and bazaars. To navigate the town one needs to utilize bikes or motorbikes since the internal streets are also narrow for automobiles to drive into. Stone Town has been assigned by UNESCO as a World Heritage Site.

The history of the stone town goes back to when Zanzibar was the major trading port of East Africa. The Swahili style of the stone town includes elements of ancient Persian, Arab, European (Portuguese/British), Indian and African styles. The proof can be seen in the antiquated structures that comprise the stone town.

The two structures that dominate the seafront of Stone Town are the Arab fort, Beit-El-Ajaib, also famous as the house of Wonders.

The Arab Fort bases on the site of a previous Portuguese Church and residential quarters and was converted to a fort for the town garrison during the 18th Century. The Mazrui Arab empire from Mombasa (Kenya) made an unsuccessful attempt to control of the fort in 1754. The skillfully carved Arab door of the main entrance was in the past in a house belonging to Sultan Seyyid Khaled bin Mohammed

The fort has been restored and now houses the Zanzibar Cultural center. It is open to visitors and contains shops, a cafe, and an ancient Greek-style amphitheater. This is where the annual Zanzibar International Film Festival is held every July and attracts film and culture lovers from across the globe.

The Arab Fort hosts the Zanzibar Festivals. Which includes the

i)Zanzibar Festival of the Dhow Countries– This festival involves theatre, traditional and contemporary music, an exhibition of paintings, crafts and sculptures. The Festival is held beginning 30 June to 9th July every year.

ii)Zanzibar International Film Festival: – This held together with the festival of the dhow countries.

iii)The Zanzibar Cultural Festival– This takes place for a whole week in July, it brings together musicians from different parts of the world.

The Mambo Club, where music performances and DJ sessions are held, is also housed in the Arab fort.

THE HOUSE OF WONDERS OR BEIT–EL AJAIB

The House of Wonders was built by Sultan Seyyid Barghash (1870-1888) as a grand palace for ceremonial purposes. It was the first building to have electric lights hence its name. It survived British bombardment in 1896 and both Sultan Seyyid Hamud (1896-1902) and Sultan Seyyid Ali bin Hamud (1902-1911) dwelled in the house of wonders before it housed Government offices in 1911. 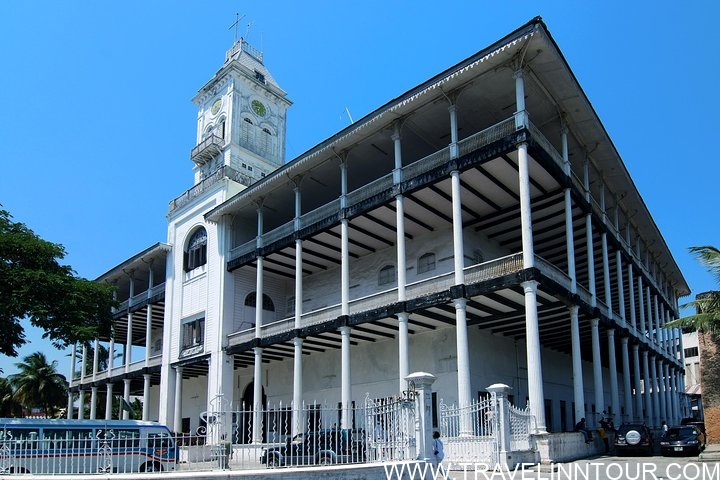 It is topped by a large clock tower and surrounded by tiers of pillars and balconies. At the entrance are two fine Portuguese bronze guns made during the sixteenth century captured from the Portuguese by Persians with the help of the British. The House of Wonders has currently been restored and re-opened as a museum. It is believed to be built on dead slaves and black criminals’ bodies.

Below the House of Wonders, by the pier, is the popular Forodhani Gardens, where locals gather in the evening and market stalls sell food and drinks. The dancing and flickering flames of kerosene lamps, tin lamps, and charcoal jikos add a lovely atmosphere to the evening market. Evenings in Zanzibar are about communing. You will find people (mostly men) in small groups discussing and children still playing.

There is an incredible variety of fresh seafood like squid, crab, tuna, and prawn that will be grilled by the vendors as you watch. Meat kebabs, chips, and chili sauce are also available. The sugar cane juice is also a refreshing treat. There is also a small curio and souvenirs market. REMEMBER this is Africa and BARGAIN! BARGAIN! BARGAIN! for anything, you buy in the market. Earlier in the day, a trip to the local market and buying some of the fabulous selection of fruit available in Zanzibar is recommended.

The Anglican Church of Christ was built between 1874 and 1882 to commemorate the end of the slave trade. It was constructed on the site of a slave market that was closed down earlier in 1873. The Church is still in use. The external walls are covered by crenulations and recesses ending in tri-foil arches.

The clock on the tower was a gift from Sultan Seyyid Barghash. One can also see the stain glass window in the cathedral that depicts Christ as an African and the cross in cathedral commemorating David Livingstone a missionary and explorer. The only remaining evidence of the slave activities is the underground chambers at the St. Monica hostel.

In case you didn’t know, Zanzibar is famous as the birthplace of Freddie Mercury, who used to be the lead singer of the band QUEEN.

Built around 1860, north of the town, this was a base for many European missionaries and explorers as they attempted journeys into mainland Tanzania then known as Tanganyika. David Livingstone, missionary and famous explorer, stayed here in 1866 for a few weeks until his final expedition. This house was given to David Livingstone by Sultan Seyyid Said. At some point in its history, the building was used as a rest house for invalids and for religious meetings, by the Ithnaasheri Khoja Community. In 1947 the government purchased it. It presently homes the Zanzibar Tourist Corporation.

This grand four-story building found near the seafront on Mizingani Road It was built originally as a private home for a well-known Ismaili Indian merchant, Tharia Topan, in the 1890s. Topan was one of the wealthiest individuals in Zanzibar at the time and a customs advisor to the Sultans. In 1899 he is said to have given up the house to be used as a dispensary, also funding the medication and other services. It fell into disrepair during the 1970s and 1980s, but was renovated with funding from the Aga Khan Trust for Culture in 1996 and opened as the Stone Town Cultural Centre.

This was a palace, which was the residence of the Sultan until 1964 when Sultan Jamshid was overthrown. It is currently a museum showing the era of the rule of Sultans in Zanzibar. It was first occupied by Sultan Khalifa in 1911 when ascended to the throne. The palace also accommodated the Royal family and the Sultan’s harem. After the 1964 Revolution, it was used by the Zanzibar Government for Cabinet meetings and for gatherings of the Revolutionary Council.

The National Museum (Beit el Amani or House of Peace)

These were the first public baths in Zanzibar. They were built by Sultan Barghash in the late 1890s. They are no longer in use but are open for public viewing at a small entry cost. The building was constructed using a coral rag with lime stucco rendering. The external appearance is plain with only a decorative dentil frieze on the upper part, surrounded by a crenulated parapet.

Mosques are scattered all around the town. They are all impressive and with a rich history. The oldest is the Msikiti wa Balnara (Balnara/Malindi Mosque) built-in 1831 by Mohammed Abdul Qadir el Mansabi, whose remains are buried in front of the Mihrab. Entry into the mosques is made only if visitors are appropriately dressed. Unlike other mosques, it has a minaret decorated with a double chevron pattern. The Aga Khan mosque is a two-storied building with magnificent designs on the outer walls.

There are some good bars around the Zanzibar town. Africa house is a particularly good one with a great view. Located on the 1st floor it is a great place for a sundowner. However, if you want a proper view of the sun setting a sunset dhow cruise will be in order. The sunset tour starts an hour before sunset.

The guests are picked from their hotels and transported to the drop off point at the seafront, where they board the dhow. The seasoned crew on board take the dhow about a kilometer away from the shore by means of an engine, once out in the sea, the engine is shut off and the sail is put up. When the sail is in favor of the wind, the dhow glides through the water, and the guests can sit back and relax. The wonder of the fiery golden sun setting beyond the horizon can then be enjoyed over a glass of wine.

The ancient art form of Zanzibar hand-carved doors and chests reflected in the brass-studded, carved, wooden doors dot the town and similar hand made artifacts can be purchased. One can also do Spice tours, go dolphin watching, or scuba diving from the stone town.

There are many islands, surrounding Zanzibar of which prison Island is the most popular to see. It is reached by boat and is renowned for the large turtles and peacocks, which can be seen amongst the ruins in the courtyard.

Recommended For You:  These Morocco Cultural Reviews To Grab Your Attention

The huge tortoise, one of the most preferred tourist attractions on the island can reach a century old and some over a meter high. The island is fringed with an attractive reef, suitable for snorkeling, and has a wonderful white beach for sunbathing. 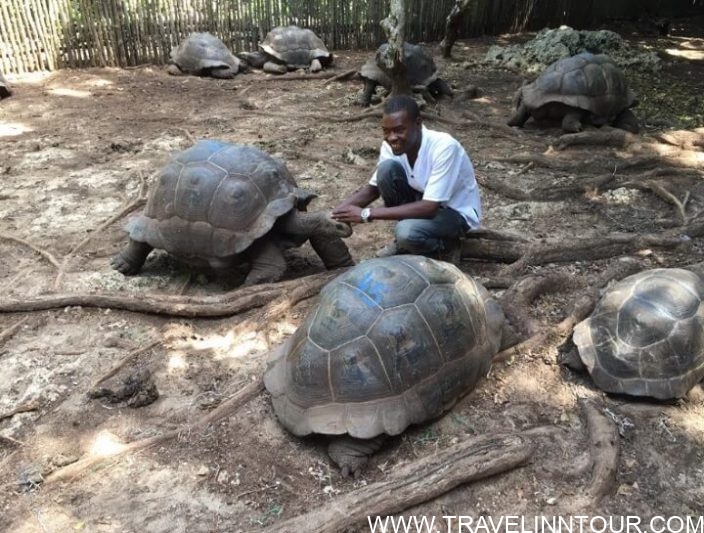 The prison island once was a prison for misbehaving slaves. The first owner was a wealthy slave owner who sent slaves to the island for disciplinary purposes. After the abolition of slavery, the island was owned by a British general and later used as a quarantine station. In addition to a natural lagoon and a small beach and restaurant, there are still quarantine houses. 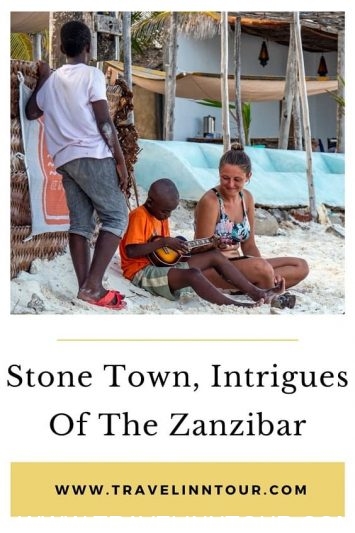 7 Best Places to Visit in Tanzania

A Guide on Where to Stay in London

Where to Stay in London, UK, Near The Attractions. Have you planned to visit London? Or are you travelling to London first time? Well, the […]