Are you considering a weekend, but you still have no idea of the destination? Stop thinking and go to London. It’s the destination, to do at least once every season, summer and winter, spring and autumn.

You have two possibilities to reach London:
● By plane: it will take about 1 hr to 1 hr 45 mins flight from Paris,
● By train: with the Eurostar, in 2 hours at 2:30 am under the sleeve from Paris Gare du Nord.

London is still the largest city in England and the United Kingdom. How to resist the charm of its English streets, its pubs, and its magnificent monuments? It’s simple, if you taste it once in your life, you’ll only want to go back as quickly as possible. There are too many places to list, but here are my five favorites.

1: A park not to miss: The regent’s park

It is simply the most beautiful park in the city, in my opinion. Already by its size, it is really very big, but also by its green spaces maintained to perfection.
To be honest, it’s pretty normal because it’s one of London’s royal parks.

The icing on the cake is the presence of squirrels, who are absolutely not afraid of humans. While strolling through the aisles or sitting quietly on a bench, they dare to come and see us without any shyness.
Be careful not to feed these animals, because it is not their usual diet.

Recommended For You:  Amsterdam Travel Guide: Getting Around, City Tours, Part 2

Last but not least, the regent’s park is home to the London Zoo. Inaugurated on April 27, 1828, with an area of more than fifteen hectares, it is more than 2000 animals for 260 different species living there. However, its entry price may discourage more than one, the ticket costing 23 pounds sterling (about 26 euros) for an adult.

2: The mythical avenue of Oxford Street

Shopping fans will be thrilled to discover this famous avenue of Oxford Street. Not to mention the most famous avenue in the UK, it is mostly the longest shopping street in Europe. Nearly 2.5 km of the showcase, for more than 300 stores. It has the largest concentration of branded stores.

Highlight: the street is limited to taxi, bus, and bicycle between 7:00 and 19:00, except Sunday.
Ultimately, the current mayor of London would like to make it a completely pedestrian avenue by 2020.

In addition to the stores, if you think of going to London in December, this is the best time to discover Oxford Street. The street is completely illuminated with festive and colorful decorations for Christmas.

We no longer present the London clock, our friend Big Ben. By the way, it’s just the nickname of the bell at the top of the Elizabeth Tower. Formerly the clock tower of the Palace of Westminster (seat of the British Parliament), it was renamed in 2012 in tribute to the Diamond Jubilee (60 years of reign) of Queen Elizabeth II.

Recommended For You:  Riga Guide, Latvia – The Paris of the Baltics – Part 2

The specificity of Big Ben is that unfortunately, you will only have pictures of the outside of the tower.
Indeed, you would have to live in the United Kingdom and have obtained an authorization, to finally be able to visit the lair of the beast.
Last but not least, the tower has a masked face. Indeed, it is under renovation until 2021, hopefully. It must be a beauty after so many years of service.

If you are in London, you absolutely must go through this incredible bridge. It was built in 1894 after more than eight years of work.

This bridge is beautiful when admired from afar and once on, the architectural details are breathtaking.
It may be a cliché, but we must at least come back with a photo taken in front of this bridge.

It’s already a big monument in broad daylight, but you can not imagine how beautiful it is during the night. These illuminations are recognized throughout the world, it’s really worth seeing.

Located in the heart of the West End, it is one of the most remarkable places in the city. It is simply a profusion of street shows, animations and shops not to be missed.

Recommended For You:  Rome Travel Guide-Two Days In The Roman Empire Capital City

The atmosphere is wonderful, especially at sunset and until the end of the night. The lights, the music, everything is there to have a good time. These bright signs are reminiscent of New York, his American twin.

It is the favorite place for tourists from all over the world. Personally, it is certainly the visit that I preferred.

So, ready for a weekend aventure break in London? 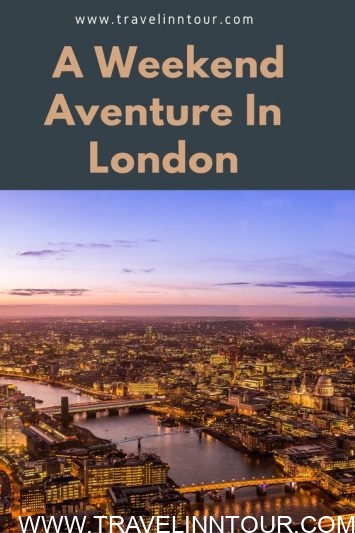 Best Cruise Lines In The World? See the luxurious cruise travel experience, that can be for anyone who is willing to pay back the size-able […]

Star Ratings Of Hotels: What’s the difference? Most of us use the star rating systems to assist with choosing a hotel for our much anticipated […]