The Akamas peninsula in the northwest of the island of Cyprus is considered one of the last natural places in the country. Far away from civilization, you can explore the mighty nature and beautiful bays. We rented an off-road vehicle for one day and drove across the peninsula. In this article, I would like to take you on our tour and give tips for your own trip! Our adventure started in Polis, east of the Akamas peninsula. To be able to use the full day, we were already at half-past eight at the rental station, so that we had filled out the forms at eight with the company and had discussed everything. At 17 o’clock we should bring the buggy back again. We had an exciting day ahead of us. From the rental, we drove back to our accommodation, packed the most essential items, and started our tour. We followed the main road south to Paphos but soon turned right. The street became narrower and empty.

Discover Cyprus – Places to Explore in Cyprus With An SUV

The Abandoned Village of Androlikou

Our first stop was the abandoned Turkish Cypriot village of Androlikou. During our entire trip to Cyprus, we did not visit a place where we could see the consequences of the Cyprus conflict so clearly. 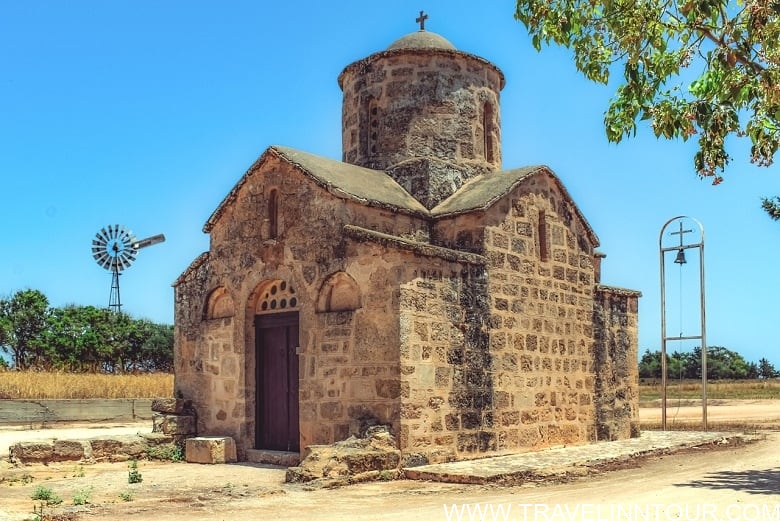 Androlikou was the reception center for many displaced Turkish Cypriots from the neighboring villages. After most men were arrested in Androlikou in 1974 as prisoners of war to exchange them for Greek Cypriot prisoners of war, finally, the entire town was evacuated in 1975. Some villagers were able to secretly flee across the mountains to the Turkish-controlled north, with most people resettled in the northern communities.

Since then, Androlikou has been a ghost village, where not even a handful of people live. Most buildings are destroyed and abandoned. From the mosque only the entrance gate and the foundations were recognizable. We let the strangely depressing mood of the place affect us, shot a few photos, and set off again.

Alone with Nature, We passed vineyards and finally reached a ridge with a beautiful view. A cold wind whistled around our ears. It was a bit hazy, but we could look at both sides of the island and see the sea coast. We wanted to go there! Immediately we realized what we still had a long way ahead of us.

The staff of the buggy rental company said there were two ways for us: the easy one, which is also easy to find, or the beautiful one through the forest. However, the route would be challenging to find here and not easy to navigate. For us, it was immediately clear that we would like to take the better way. While I tried to find my way around the map, Francis gave full throttle, and we followed a gravel road towards the sea.

The track became hilly, and it was tough to see where the right path was going. Our buggy rolled over the white rocks. Suddenly the path ended between two little bushes. Before us, the gravel road led down a steep slope. That could not be the right way! We put the buggy in reverse and looked for another path. For a long time, we did not meet anybody we could have asked. Only a herd of goats came by and blocked our onward journey.

Recommended For You:  The Ultimate Travel Guide To Sydney, Australia

We found another track that finally led us downhill to the coast. We do not know if we had really gone the difficult way or had taken a route that was not available for choice. It was beautiful, and we had lots of fun!

From now on we could not miss the right way anymore. Other off-road vehicles came towards us, sand was whirling in the air, and we were glad to have our buff wipes as mouth guards.

Discover Cyprus – Avakas Gorge – In the Grand Canyon of Cyprus

The gravel road led us along the coast to the south. We parked the buggy in a shady spot and walked on foot. For thousands of years, a small river has carved a deep ravine into the limestone. We followed the short trail that leads to the three-kilometer Avakas Gorge. Partially it is only a few meters wide. We were utterly overwhelmed by the beauty of this gorge and the countless photo opportunities.

At the Turtle Beach Back in our buggy, we followed the coast north and arrived at Lara Beach. Far away from civilization, we found our favorite beach. This excellent sandy beach is nestled between the hills and rocks of the Akamas National Park. In the most different shades of blue shone the calm water and forced us to take a more extended break. There was a lot of flotsam in the sand, but that too could not relieve our enthusiasm for the beach.

The way to this spot is only 4×4 recommended. So if you want to go to Lara Beach, you should definitely rent an off-road vehicle or have good insurance for your rental car. On the way to the beach, you pass a large sign “Lara Bay Beach.” Do not be fooled by this, because this guide will take you to another beach. The real Lara Beach is a bit further north.

Depending on what time of year you are on the beach, there are many protection efforts along the shore with the signs “Turtle Nest – Do Not Disturb.” Lara Beach is one of the few turtle breeding grounds in the Mediterranean. Pay close attention to where you go and pay attention to the following rules to protect the animals:

At the end of the beach, there is a small hut of the turtle organization. Here you can find out more about the turtles and the protection program on the information boards.

Recommended For You:  Good Day From The City Of Melbourne Australia

In the high season, Lara Beach will undoubtedly be busier, but in November it was wonderfully quiet with hardly any people on the beach.

After we had cooled down in the sea, we swung back into the buggy, strapped ourselves, and made our way to the next station. Parallel to the coast, we followed the sandy paths to the north.

Deep holes slowed us down again and again. For our buggy, these were not an obstacle. Slowly we rummaged through the mud-filled pits. As soon as we had dry ground yet, Francis stepped on the gas, and the mud on the wheels was whirled upwards. Yuck! I quickly tried to protect our camera under my arms and became covered in brown spots. If anyone had met us, he would not have believed that we had just been swimming at Lara Beach.

Since we left the dream beach behind, we were completely alone with nature again. No other vehicle was visible. It was already quite late, so we hardly took any breaks and tried to make a long-distance quickly. We reached a signpost that now sends us inland towards Fontana Amoroza.

The Bath of Aphrodite The east coast of the Akamas peninsula is known for its beautiful, crystal-clear bays. According to legend, Aphrodite is said to have met Adonis for the first time at Fontana Amoroza and to have fallen madly in love with him. When we reached the bay, we were welcomed by a strong wind. Big waves whipped against the coast and only gave us an idea of where the turquoise blue coves should be.

The Blue Lagoon a few meters further fought with the weather. According to the locals, it is supposed to be the most beautiful bay in Cyprus, but unfortunately, the different blue tones were not recognizable. Nevertheless, we were thrilled by the spectacular fountains that rushed up the cliffs. Far and wide no other tourists were to be seen.

Past the Manolis and Amphitheater Bay, we drove along the narrow gravel road back to Polis. The sun was already starting to say goodbye, and we had only a little time to return our buggy in time.

One last stop was at the bath of Aphrodite. The small cave was now pretty dark. Water dripped from the stone walls. According to mythology, Aphrodite is said to have been waiting here for Adonis while he was killed by the jealous Ares.

In the last few kilometers we came forward faster than expected, so we reached the car rental point at 17 clock and returned a bit wistfully to our dirty buggy.

Essential tips for your tour of the Akamas Peninsula

If you also want to explore the Akamas Peninsula in Cyprus, I have summarized the three most relevant pieces of information for you:

1. Rent an SUV for your Akamas tour, there are various off-road vehicles to choose from: quads, buggies, motorcycles but also mountain bikes. For two people we can absolutely recommend a buggy! We were glad that during the eight hours we had decent seats, a roof for sun protection, and a rack for the backpacks.

We rented the big buggy with more power (800 cc) and paid in the low season 100 euros including insurance and gasoline. Compared to an average rental car, the price is overly expensive but absolutely worth the fun! Depending on the season, this price may vary. If you only want to drive along the coast, maybe even the smaller version (500 cc for 80 €) is enough. On the steeper routes in the mountains, we were pleased that the landlord advised us to take the more powerful variant. 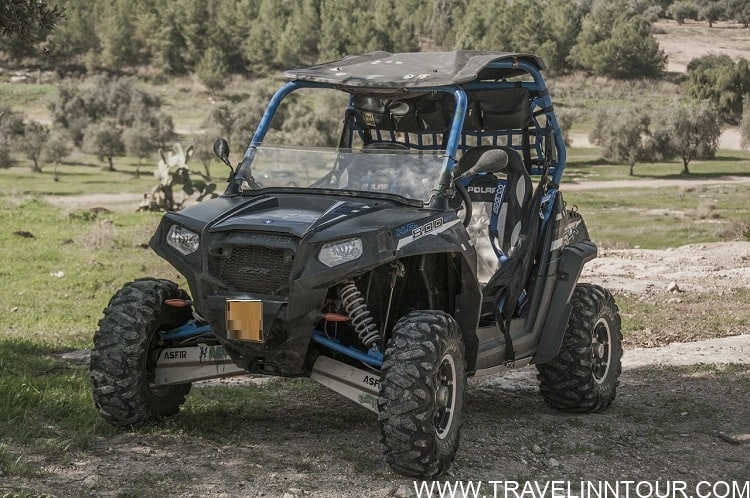 2. Find the Right Route Especially the first stage from Polis over the mountains to Lara Beach is not very easy to find. We had a map from the car rental company and also made sure over and over again with Google Maps whether we could be on the right track. If you have great respect for exploring the peninsula alone, you can also rent a tour. The guides know the routes well and also have better time management. We really had to accelerate along the east coast so we could leave the park in the light.

However, you must also be aware that the cars stir up a lot of dirt and dust. If you go on a tour in a column, you get all the dirt from the vehicle in front of you.

Another alternative is to explore the Akamas Peninsula on foot. If you like hiking, this is undoubtedly a great way to discover the nature of the Peninsula.

We also come to another critical point. Things you should not forget about your trip:

A Guide for Your Chardham Yatra by Helicopter Trip

Chardham yatra by helicopter packages and helicopter services are for the pilgrimage of the divine Chardham yatra, most safely and comfortably. The destination that covers […]

10 Long Distance Hiking Trails In The US

These top 10 long distance hiking trails in the US are not less than 100 miles long and they are mainly footpaths. Some of the […]

Things You Must Experience On Your Family Vacation In Costa Rica

Are you preparing for your next family vacation in Costa Rica? There is no better place than the remarkable waters of Costa Rica’s breathtaking beaches […]